My trip to Poland

By Cheryl Fisch
As part of the recent Etz Chaim Poland-Israel Trip with Rabbi Yaakov and Henny Fisch, I visited
the place where our people experienced the height of richness and the abyss of hell. Everyone goes with
a different intent, and some people refuse to go at all. However, I felt compelled to visit the place
where my father's brothers and sisters perished and to say a prayer at Auschwitz/Birkenau, the place of
their deaths.
Arriving in Warsaw on June 25 by way of Frankfurt, we landed on a sunny afternoon and made
our way to POLIN Museum of the History of Polish Jews. It is poetic justice in a way for this magnificent
edifice to be built on the site of the former Warsaw Ghetto. Inside its walls, the history and culture of
Polish Jews who flourished there for a thousand years are beautifully displayed with multimedia
exhibitions. Hundreds of thousands of visitors make their way to the museum each year. In front of the
structure is the Ghetto Heroes Monument, commemorating the Warsaw Ghetto Uprising of 1943. It was
built partly with materials brought to Warsaw in 1942 by Albert Speer, Minister of Armaments under
Nazi Germany, for his planned works.
Day two found us in the Warsaw Jewish Cemetery, miles and miles long with gravestones in
disarray amid the undergrowth. Tucked away in a corner is a larger-than-life monument honoring the
heroic actions of Dr. Janusz Korczak, who gave up his life in order to accompany “his” 200 orphans out of
the Ghetto to Treblinka.
Next we were on to Majdanek concentration and extermination camp, on the outskirts of
Lublin. There is no need to go into the atrocities that occurred there; however, I would like to relate a
meaningful moment that one of the visitors on our trip experienced. His uncle, his father’s brother, was
murdered there and he wanted to pay homage to him. We made our way to the memorial that exists in
the camp, which consists of a huge mound of dirt and ashes, covered by a large dome. You have to climb
many steps to get to the top, and it was there that this man, 80 years after his uncle was brutally
murdered, sang “Kel Maleh Rachamim” (prayer for the soul of the departed) and “Ani Maamin” (a
rendition of Maimonides' thirteen principles of faith) together with Rabbi Fisch and our tour guide Ilan
Segal.
At the Lublin Jewish Cemetery, we visited the grave of the “Chozeh of Lublin” (the seer of
Lublin), where one pours out ones heart and feels humbled knowing the majesty and greatness of this
great tzadik (righteous man).
We spent the night in Lublin and stayed in the hotel called Ilan Lublin, which housed the former
Yeshivat Chachmei Lublin (school of higher Jewish learning) of the illustrious Rabbi Yehuda Meir Shapiro.
The outside structure is exactly as it was when it opened in 1930 and now houses a 4-star hotel with 44
rooms. In the morning we made our way to the second floor, where the synagogue and small museum is
situated and tells the story of the luminaries who inhabited this illustrious building.

The next day our tour guide had a special treat in store; we went to a small town called Lancut
and visited a synagogue that was opened in 1761 with its magnificent vaulted ceilings. I was very

impressed with the Polish gentleman, Mira, who greeted us as we walked into the foyer. This simple
Polish man, who speaks fluent Hebrew, has made it his life’s mission to scour the countryside and
retrieve Jewish artifacts and preserve them in the shul. The front room contains pieces of Jewish
headstones, old Tefillin (phylacteries), menorahs, trays and much more. Mira left a deep impression on
me.
This trip also gave us the humbling opportunity to visit the graves of the righteous Rabbi
Elimelech of Lizhensk and the great Sara Schnierer, the visionary who, in Krakow in 1917, began the Bais
Yaakov movement, a place of higher Jewish learning for girls.
On the final day of our trip, we headed to Auschwitz/Birkenau, and the way there was a buildup
of pent-up emotions. Merely getting off the bus caused me to finally break down in tears, thinking of the
enormity that led me to this sacred place. There are no words to describe the horrors where millions
perished. We ended the day feeling spent and drained but took consolation in the fact that we were
now headed to Israel, our Homeland and salvation for the Jewish people.
I had gone naively into unknown territory, but I was hopeful and optimistic for the future as I
entered the Holy Land. 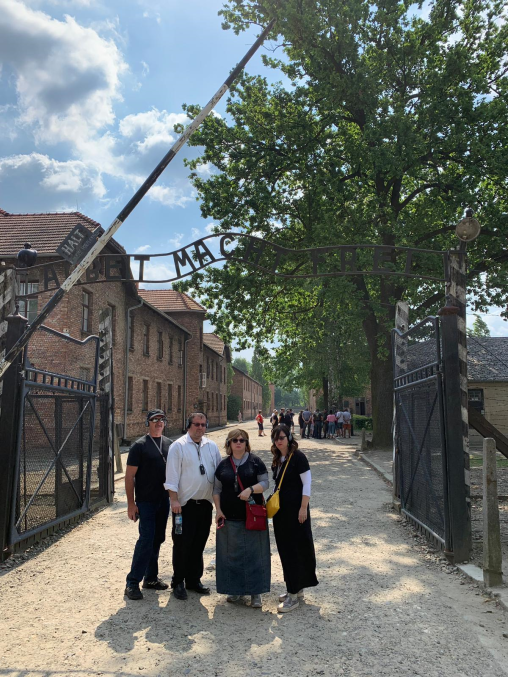