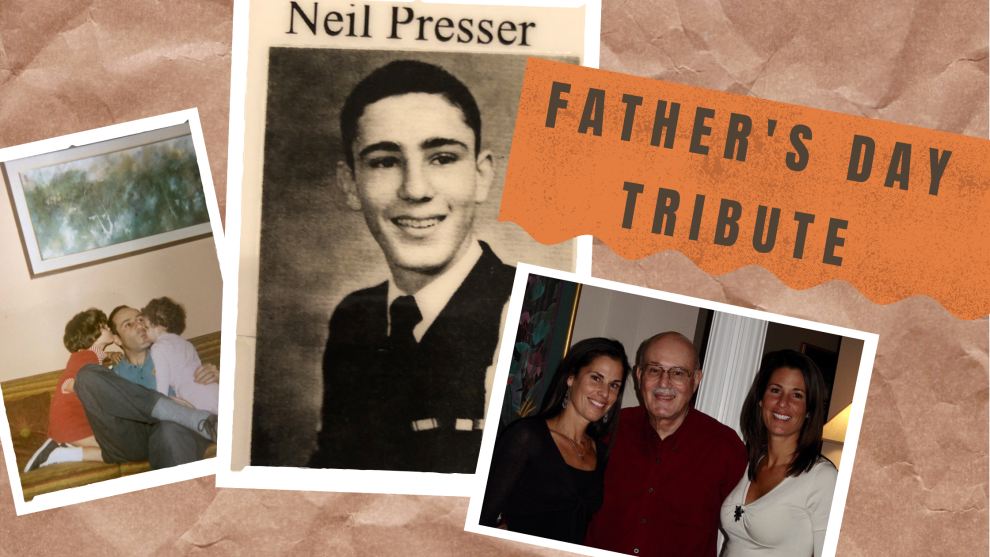 When my sister and I were asked to write about our Father’s legacy and how it has affected our lives, it was not only an honor, but an incredible gift.

Born in New York City to Mac & Lillian Presser, Dad and his older brother, Edwin, moved to Jacksonville when he was 3. He was a graduate of the Bolles School, attended the University of Florida where he completed a degree in Accounting, and served as an officer in the U.S. Navy. Raised in a conservative Jewish home, the importance of family, Judaism, and giving back to the community were instilled at a very early age. Those values were evidenced throughout his life.

Dad didn’t need to tell us about the importance of giving, he led by example. Dad practiced the mitzvah of Tzedakah in all aspects of his life. He was always available to help family, friends, neighbors, colleagues, the Jewish community, and anyone who was in need.

He intertwined the entities he so fervently supported by making them part of our daily lives - most of the time without us ever realizing it. We spent weekends with our grandparents, visited family and friends at River Garden, attended Shabbat service, High Holidays, and Hebrew school at the Jewish Center, and enjoyed camp, tennis and social events at the JCA, where he was a founding member.

Dad was a mentor to his employees, co-workers, and at the end of his life even to his caregivers.

He left an indelible mark professionally as well. He cofounded the accounting firm Davis, Presser and LaFaye in1963. Twenty years later, he and two partners founded Presser, Lahnen and Edelman. After more than 40 years as a public accountant, he retired in 2007.

It wasn't just what he did that made such a big impact on my sister and me, but how he did it - discreetly, never looking for acknowledgement. It was something he did for himself and for others selflessly. He wanted to give back to the community, he cared about people, and he knew how important it was to provide support by giving of his time, insight, and heart. And it wasn’t until the end of his life that we truly understood the depth by which he gave of himself.

Dad established the Neil Presser Endowment Fund driven by family tradition to leave something impactful behind. It represents much more than a monetary gift. It is his legacy. It is his personal commitment to making the Jacksonville Jewish community stronger now and for the future.

And it is yet another vital lesson he wanted to impart in my sister and me without ever uttering a word. Dad is our role model. He has inspired us to be more aware, to be more involved, to find ways to give back, big or small. Whether it’s our time, resources, or compassion, he taught us to always help others, to be a mentor, and to do these things with passion and enthusiasm.

He has strengthened our commitment to support the community where we were raised and carry on the family tradition instilled in us. Dad has built the foundation, and we aspire to nurture his lifelong work. Although my sister and I no longer live in Jacksonville, we’ve always felt a strong desire to stay connected and be involved with the Jewish community that raised us.

To carry on his legacy and honor him is the best gift he could have left us. Engaging with the Jewish Foundation and being a part of the process to establish, grow and give through our Father's legacy fund has given us the ability to ensure his memory be a blessing to all.

Written and submitted by Jeri and Pam Presser