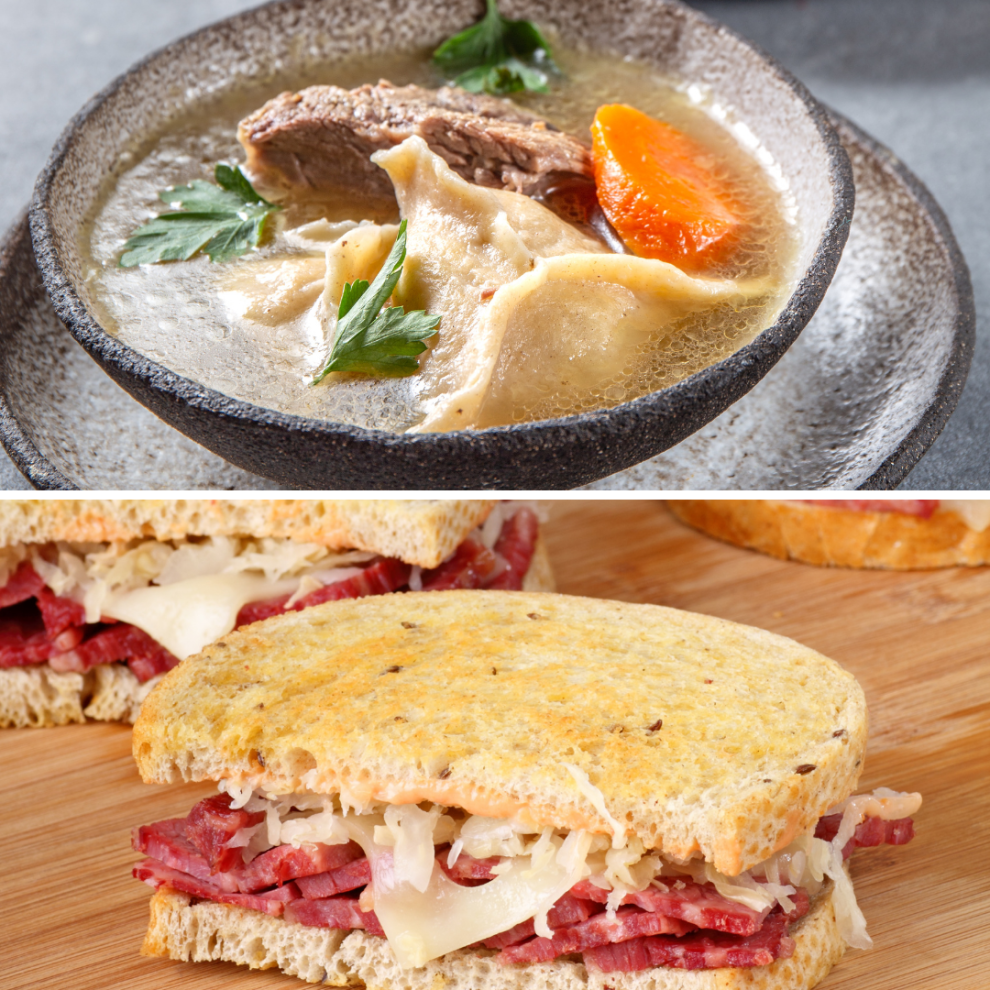 My husband's love affair with corned beef sandwiches found us in a delicatessen in Ft. Lauderdale not too long ago. His desire for this grainy, steamed, fatty red meat piled high between two slices of rye bread and slathered with Hebrew National delicatessen mustard only escalates because Jacksonville has no delis where he can satisfy his hunger for this artery-clogging meal.

While Larry is anxious to give the waitress his order, I am perusing this oversized menu looking for something I can eat because I don't share his love for corned beef. And there it is--right under SOUPS and SALADS— "Chicken Soup with Kreplach." Immediately I tell him what I will have, and he gives our order to the waitress.

We sit at the table with cautious smirks—each of us waiting to satisfy a long-overdue desire. My memories of kreplach consume me at this moment, and all I can think of is my grandmother's kitchen where she lovingly made these small little dumplings. Similar to Italian ravioli, but with thinner dough, or a Chinese wonton, but filled with veal rather than pork (a no-no in Jewish cooking), kreplach are usually boiled and served in chicken soup.

For as long as I could remember, my maternal grandparents lived within walking distance of our house so I reaped the benefits of an extended family and a doting one at that. Not to mention that I am the oldest female grandchild and the only other granddaughter is my younger sister. Needless to say, I was "the princess" to my grandparents. I spent a great deal of time with my grandparents. Often, my parents would drop me off at their house, and I would sit for hours in Grandma's kitchen watching her make her special dishes. But none were as wonderful to me as her kreplach. As far as I was concerned that was her coup de grace.

First, she pounded and pounded the veal until it was paper-thin and then ground it. Then, she rolled and rolled the dough until it, too, was thin. She cut the dough into little squares, filled each one with veal, and then pinched the edges shut. She tossed the whole lot into a large pot of boiling water. When they were ready, she scooped them out of the pot and placed them in a heap on a large platter to cool.

And when she felt the time was right and I wouldn't burn the roof of my mouth, Grandma put three kreplach on a small plate for me. They were warm, and I ate them slowly, without chicken soup, and I savored every bite. These little dumplings were the highlight of my day.

Grandma made kreplach for most Jewish holidays and a few secular ones, too, and she always saved some for me. This went on for years. When I knew she made kreplach, I darted over to her kitchen and devoured them. And I always ate them warm--without the chicken soup. The last time I bit into Grandma's mouth-watering delicacy was Thanksgiving of my senior year in college. I dashed through the front door of my house; waved "hi" to my family; dropped my suitcase at the front door; bolted out the back door, and practically ran the two blocks to my grandparents' house. Grandma had made her delicious kreplach, and they were on a plate waiting for me to dive into them.

And sitting in that Ft. Lauderdale deli, I couldn't wait to dive into that kreplach, soup and all. Finally, the waitress placed the bowl in front of me. I stared at the two little dumplings afloat in the soup. I sat, not moving until my husband asked me if I was planning to eat the soup or just watch it.

I slowly picked up my spoon and carefully dug it into a kreplach. I placed a small portion of the dough and meat into my mouth, chewed it slowly, then swallowed it.  I put down my spoon, called over the waitress, and ordered a corned beef on rye.

Carole Ort is a retired high school English teacher married to a retired podiatrist (Lawrence Ort). Her husband has been in Jacksonville since 1967 after coming from New York. Carole arrived in Jacksonville in 1996 from Miami Beach. The couple is a member of the Jacksonville Jewish Center and Jewish Community Alliance. They support River Garden as they have volunteered for many years and are strong supporters of Hadassah.